More
BLUCALYPT  "THE  REDS  WITH  THE  RECORD" 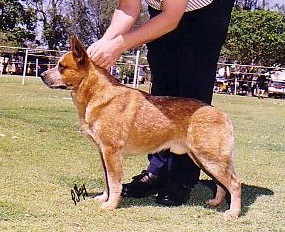 Darcy was the first red Gr Ch in Queensland and the first ACD to gain all points for his Gr Ch title under the Gr Ch system.

He took the show ring by storm on his arrival in Queensland, gaining his Australian Champion title (0-100 points) in just 7 shows, thought to be a breed record.

Darcy was a multi royal winner (including res in group or group 2), multi specialty BIS winner & a multi best & reserve in group & reserve in show winner at all breeds level. Darcy also competed in the Cattle Dog & Kelpie Club of Qld pointscore for 4 consecutive years. He won the poinstscore in each of those years, and so retired undefeated from the pointscore. Over those four years Darcy stamped his dominance well & truly in the breed show ring. He competed at 118 shows, including specialties & royals, winning 81 challenges & 22 reserve challenges.

His show record has continued into his latter years, winning challenge dog & runner up best of breed at Toowoomba Royal, just weeks prior to his 9 th birthday. After a show ring absence of almost 18 months he came out for a quick stroll around the ring again in December 2008, aged 10 1/2, for two shows. At the first he was awarded Best of Breed after defeating two other Grand Champions, both half his age in class. In the 2nd show he also won Best of Breed, along with an Open in Group award. He really is a sprightly old chap!!

Darcy has also had an outing in 2009, just weeks before his 11th birthday, once again taking Best of Breed & Open in Group!!

Darcy proved himself to be a potent sire, producing winning offspring in Queensland, NSW, Victoria & Sth Australia. He is a multi champion sire & grand sire, many kennels now have based their breeding program on Darcy’s progeny.

Sadly Darcy passed away, just prior to his 11th birthday, towards the end of May 2009. He will be remembered by many, not only for his dominance in the show ring, but also for his wonderful, fun loving attitude to life.

We do have some frozen semen (NOT FOR SALE) stored, so on a brighter note can say "Watch for Darcy's pups" once again at some stage in the future.

Gr CH Bangeeri Aussie Alchemist - The Grandest Champion of all. 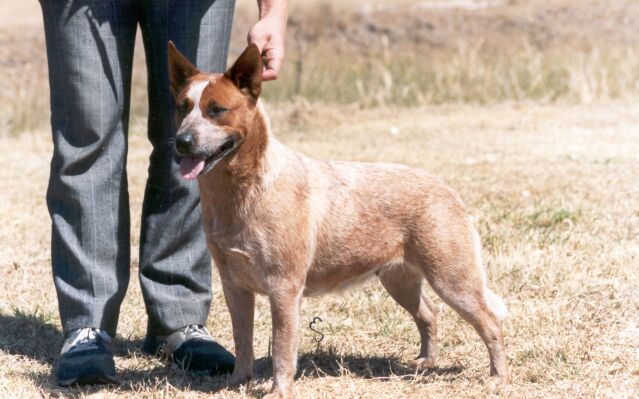 Renee was one of the red speckled ACD’s that led the “charge of the red’s” back in the early ‘90’s. She was the first red ACD to win BISS at the Cattle Dog & Kelpie Club of Qld at the September Championship Show in 1992. This was followed by challenge bitch & r/u best of breed in 93 & reserve challenge bitch in 94. She was undefeated in 13 shows (open & champ) for best red bitch award at the same club's shows. Renee was also a royal challenge & Best in Group winner.

A true champion of the breed in every sense.

bred by A & C Edwards 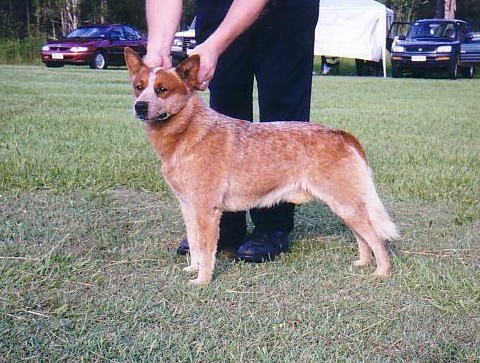 Red came to us for a couple of years (on loan from Arthur & Cheryl Edwards) as the outcross we needed to help our breeding program. Tested pattern A for PRCD, BAER normal & with good hips he was mated to Britt producing a lovely litter. He went back to home to Turrella on 97 challenge points, Cheryl quickly winning the remaining 3 points in NSW gaining Red’s championship title 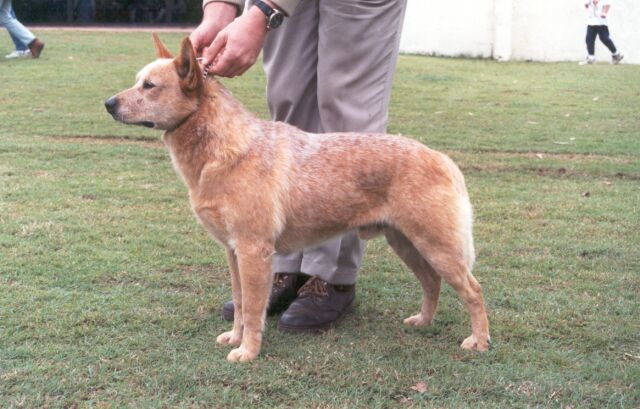 Boomer was to begin his show career with glory, winning Baby Puppy in Show (All Breeds) at his first show. He followed this with a number of baby in show / group wins and sweepstakes victories - this continued through both minor & puppy classes. He was a multi Best in Group winner (all breeds), Royal reserve challenge winner & 2 time specialty challenge winner. His biggest claim to fame was winning Best Exhibit in Show at the Cattle Dog Society or NSW Silver Anniversary Show in 1998 (144 entries), still our most important win in my view.

He then broke our hearts when BAER testing became available. On testing our entire kennel we had 1 fail, Boomer. Unfortunately Boomer had no hearing in the left ear, precluding him from ever becoming a part of our breeding program. Britt was an once in a lifetime girl. Winning from an early age in the show ring, she went on to become an all time favourite of ours. Best of Breed 2000 Brisbane Royal, followed by reserve bitch in 2001 she also won at Toowoomba Royal and was Cattle Dog & Kelpie of Qld pointscore winner. Britt attained championship status at 16 months of age with a Best in Group win.

Britt was also our best ever dam producing many champion sons & daughters, including multi BIS winners at all breeds level. 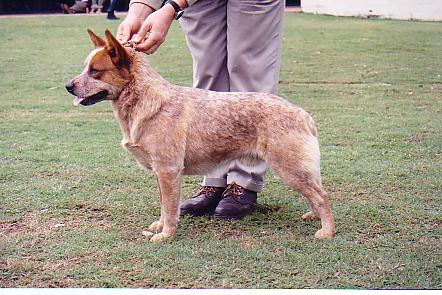 Bart—What can I say, still classed by both of us as our best puppy to date. Bart attained his title at just 10 months of age with a Best in Group & Champion Puppy in Show award. This qualified him as the first ACD to compete in either the Queensland Dog or Puppy of the year competition, where he was a 1st round winner (and is still the only ACD to not be eliminated in the 1st round)

Bart was lost to us at an unfairly young age, having only produced two litters from which we were to keep & title a son of his. He will always be the pick of the crop to us. 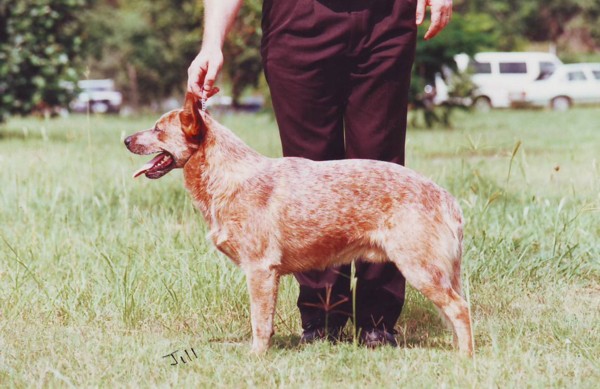 Barney was the pup we kept from Bart’s  litter. He was our “ugly duckling” and was only kept because nobody wanted to buy him—at 8 weeks of age he was just plain ugly. To our surprise he soon began to blossom and went minor in show at his 1st outing at the Cattle Dog & Kelpie Club show in Feb 1998. He went on to attain his title as a junior & followed in his fathers footsteps in qualifying for the Qld Puppy of the Year Competition from one of his several Champion Puppy in Show wins.

Barney was re-homed as a pet before the age of 2. 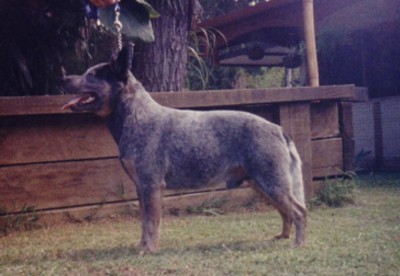 Klous was our 1st registered ACD. He was a multi champion sire and his bloodlines are still producing winners throughout Australia and other countries. Aged 20 days younger than our eldest child, Klous was a wonderful mate & guardian for both our children and will be remembered by both them & ourselves as such forever. 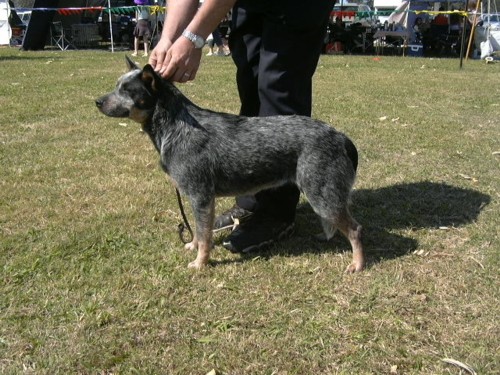 Bianca was our first (& only to date) blue to gain her Australian Champion title. She has produced some really typey, solid pups of excellent temperament in both her litters to date, including Blucalypt Blue Kate, featured below.

Reserve Bitch, R/U BOB & Minor in Group at Toowoomba Royal in 2006, aged at just 8 months, she went on to win Challenge Bitch & R/U BOB at Brisbane Royal from Junior class that same year. Bianca was awared Reserve Bitch again at Toowoomba Royal the next year. She gained her Australian Champion title with ease from limited showing.